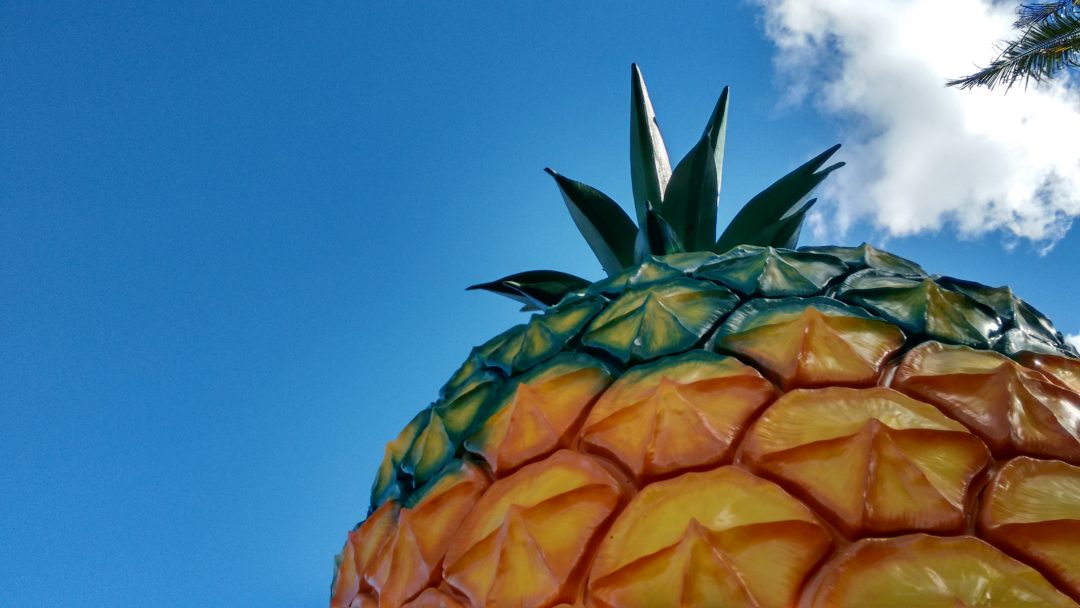 Take a tour of all the BIG Things on the Sunshine Coast – from the Big Pineapple to the Big Shell  – with our comprehensive sightseeing guide.

Everyone knows that in Australia we like things big! After all, we’ve got the biggest reef and the biggest rock in the world.

But you don’t need to travel too far to see the wonders of our Aussie obsession with BIG Things, just take our bucket list tour of all things big on the Sunshine Coast (and a few extras nearby). 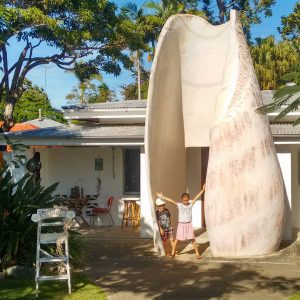 The Big Shell formed part of the entrance to a shop that sold (you guessed it) shells and other beach-themed products. You walked through the Big Shell to access the front door, the owners sometimes played Hawaiian music as you passed through the shell. Sadly, the shop is now closed. The famous Big Stubby and House of Bottles which were also nearby and iconic in the 1980s and 1990s are no longer there. 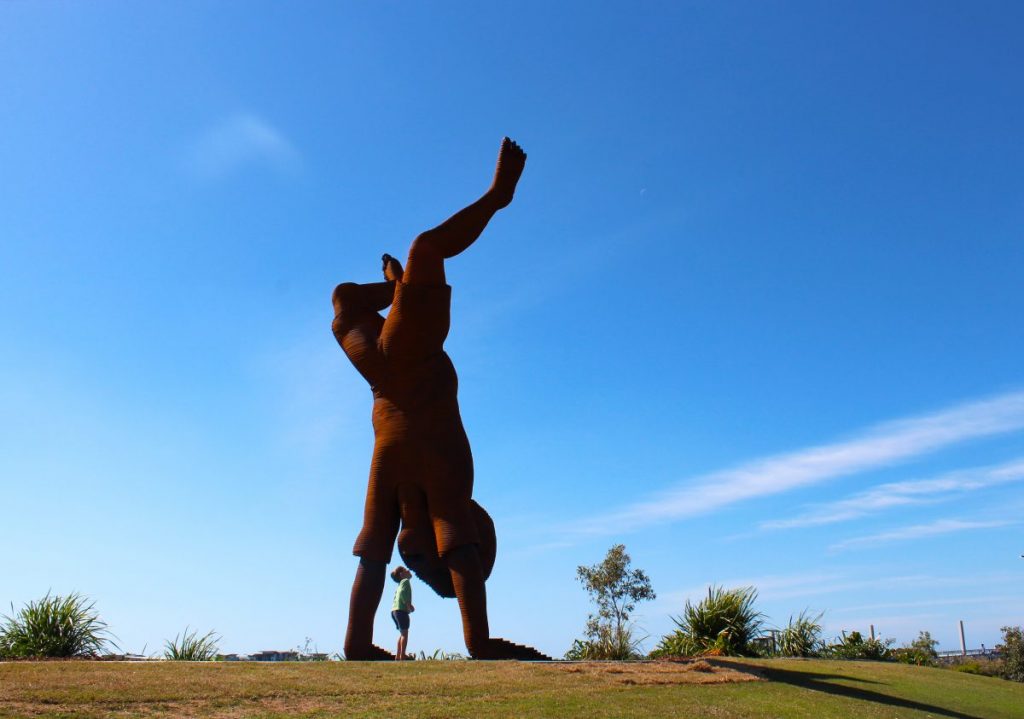 The latest edition to the Sunshine Coast’s list of BIG things, this 6-metre high sculpture of  a  cartwheeling child captures the joy of childhood, the importance of exercise, and the achievement of having done something difficult. The statue called ‘iDIDIT!’ took artist Russell Anderson eight months to complete and sits in the park alongside the Sunshine Coast University Hospital. The impressive 8 tonne statue, which is made out of weathering (plate) steel, was officially unveiled in July 2017 and is fast becoming a hit on the coast’s tour of all things big. 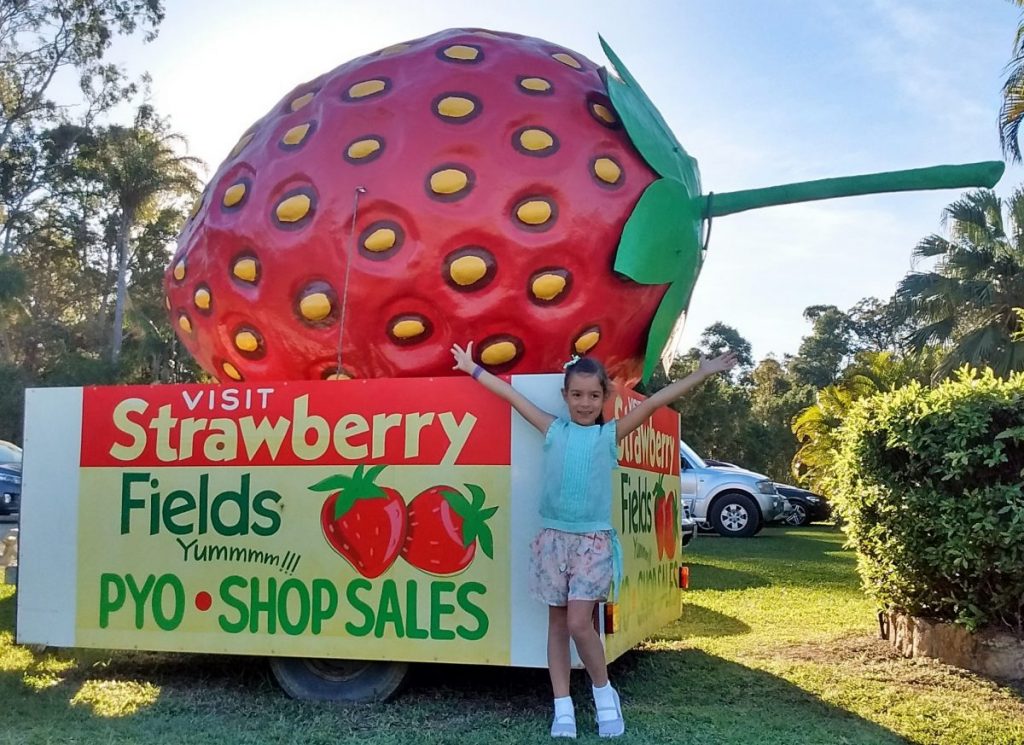 There are a number of big strawberries dotted around the region. Perhaps the most famous is found at the Rolin Farms strawberry fields, where you can pick your own berries from June to October. There are also smaller strawberries on the way in. Strawberry Fields at Palmview also has a big strawberry onsite for visitors to take photos beside.

CLICK HERE TO FIND OUT WHERE TO PICK YOUR OWN STRAWBERRIES ON THE SUNSHINE COAST! 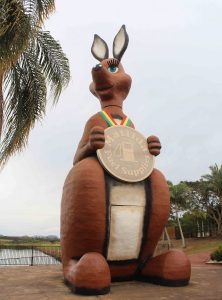 Matilda is a 13 metre high kangaroo

Matilda is the 13 metre high kangaroo that won the world’s hearts as she batted her eyelashes as she represented Australia at the 1982 Commonwealth Games in Brisbane. These days she has retired and resides at a service station in Kybong, a suburb 11km south of Gympie.

Not one of Australia’s most ‘iconic’ big things by any means but, nonetheless, if you are doing a tour of big things you might want to stop by this slightly tacky big hand holding a garage door remote. Yep, you guessed it, this one is basically a sign for the company it sits in front of, but there’s no arguing it’s far bigger than normal! 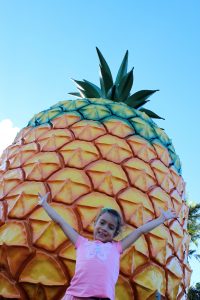 Arguably our best known ‘big thing’, the Big Pineapple has recently had a bit of a spruce up with a coat of paint on the outside. First opened in 1971, the heritage listed Big Pineapple is 16 metres tall. Notable past visitors include Prince Charles and Princess Diana. You can still climb to the top via an internal staircase, with displays about the attraction on the way up. Big things are planned for the wider Big Pineapple site. A small souvenir shop and cafe is open every day, while you can also catch the Pineapple Train (open every day 9am to 4pm, with the last train leaving at 3.30pm) around the property for $5 per person (children under 3 free), with the chance to hop off at the Wildlife HQ Zoo (separate entrance fees apply) which is located at the bottom of the hill. TreeTop Challenge is also located next door at the Big Macadamia (see below for details).

While definitely not huge, the Big Harp is still good for a photo if you’re doing a tour of big things. It’s located in Balmoral Ridge outside the art gallery Lift. 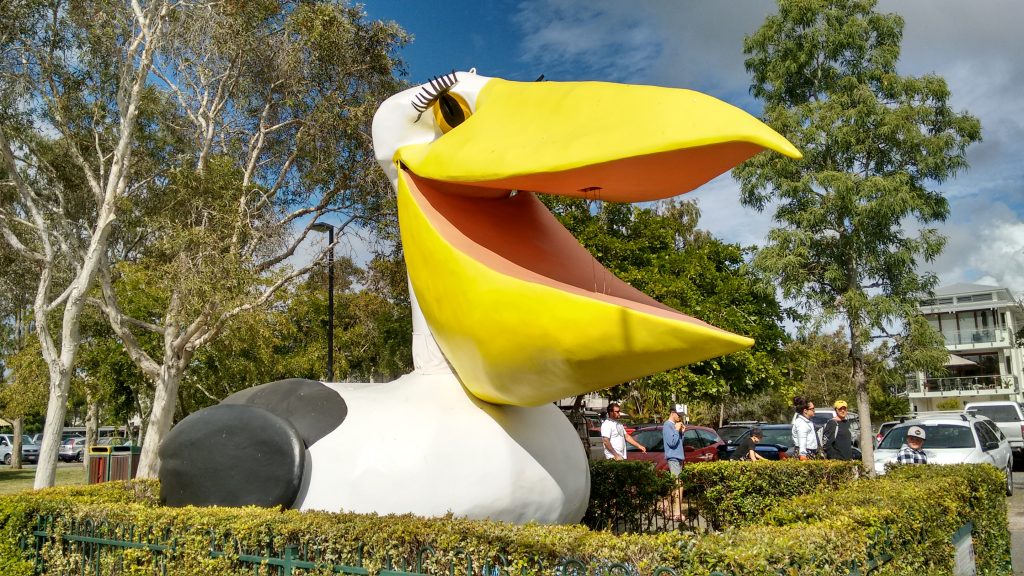 Located on the foreshore of the Noosa River in Noosaville Lions Park, the Big Pelican remains a popular spot for families to visit, take photos and usually debate whether the bird’s prominent eyelashes mean the Big Pelican is a girl or not. The Big Pelican was built around 1977 as a float for the Festival of Waters Parade.  As the emblem of Noosa Council at the time, it’s called Percy the Pelican. Like the Big Pineapple, the Big Pelican has recently received a new coat of paint.

One of two Big Ned Kelly’s in Australia (the other is in Victoria), Maryborough’s Ned is 7 metres  high and fronts the Ned Kelly Motel and service station in Maryborough.

You’ll find the Big Whale in Hervey Bay outside the Fraser Coast Discovery Sphere. The statue is in honour of the real life humpback whales that visit the bay area from June until October every year. The 22-tonne sculpture of ‘Nala’ was unveiled in 2012. The sculpture was designed to be the ‘mother’ of the smaller humpback sculpture built into the roundabout at the intersection of Main St and the Esplanade. The real Nala is a female humpback who has returned to Hervey Bay every year since 1992.

No longer on the Sunshine Coast.

A famous big thing that was located at Kulangoor on the Sunshine Coast for many years, the Big Cow was sadly moved out of the area in early 2020. A 1970s-’80s tourist attraction, the Big Cow has been relocated to Highfields, near Toowoomba.

* Information correct at the time of publication. 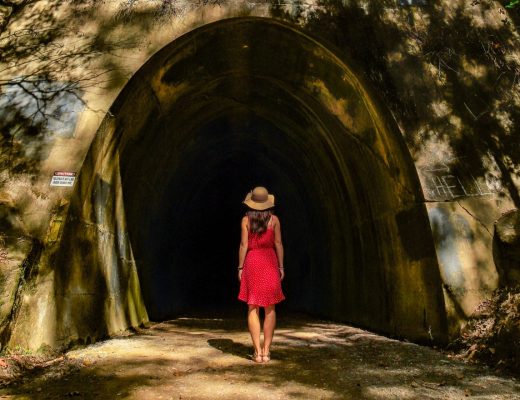 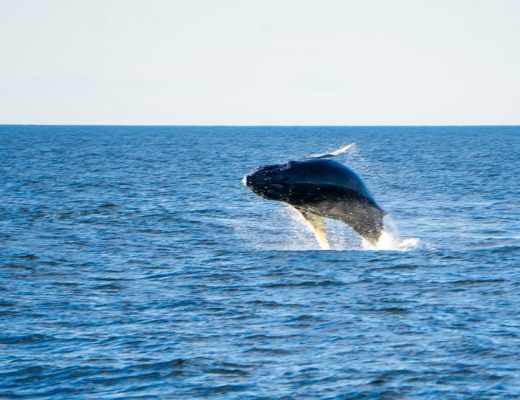 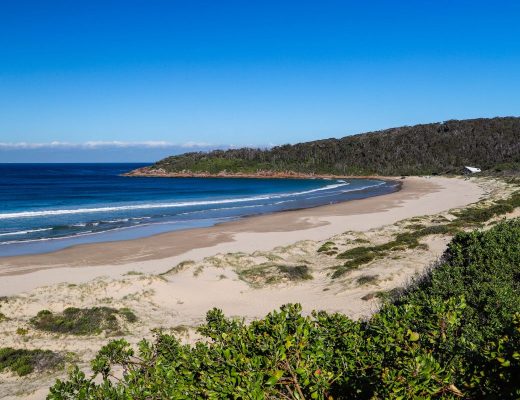 Drive Your Own Adventure up the NSW coast

Reflecting on the year so far with this beautiful

“I love penguins, for they walk like they’re g

“If you’re going to rise, you might as well sh

“It is almost impossible to watch a sunset and n

Strawberry season is back in action on the Sunshin

“Magic is believing in yourself. If you can do t