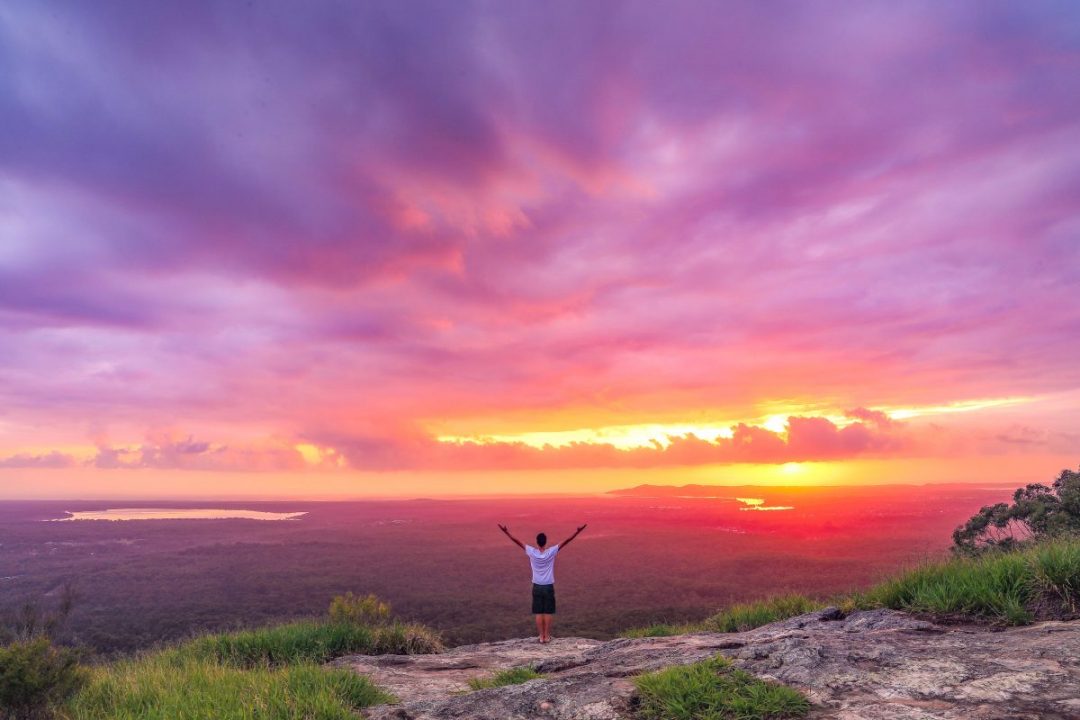 Rise and shine, you’re on Sunshine Coast time! And one of the best times to explore the region is at dawn, when nature regularly puts on a impressive show.

Along with the chance to see the sky light up in colour as the sun rises above the horizon, you’ll also have many of the coast’s most beautiful spots all to yourself (or shared with only a handful of other early risers).

Your guide to the best sunsrise spots on the Sunshine Coast:

One of the Sunshine Coast’s most easily accessible mountain sunrise spots, Mount Tinbeerwah (seen in the photo above) is just a short drive from Noosa. It is also only a short 1km hike to the top from the highest car park. The track is also wheelchair and pram accessible to the first lookout point which offers views to the coast. Beyond that point the track does include some stairs etc as it climb up towards the fire tower lookout, which is perched 265m above sea level. From the top there are spectacular panoramic 360 degree views over Noosa and Coolum and inland to the Glasshouse Mountains, making it the perfect spot to watch the sunrise (or sunset). 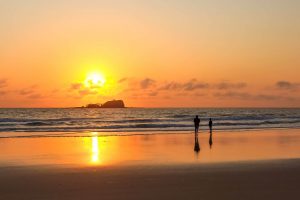 Sunrise over Old Woman Island as seen from Mudjimba Beach.

Watching the sun rise above the horizon and over Old Woman Island is particularly special. Just don’t expect to have the beach to yourself! The locals love to make the most of the day, catching a few waves or paddling out towards Old Woman Island before starting the day’s work routine. If fact, some days it can get pretty hectic down there (well, hectic for the chilled out Sunshine Coast!) but it’s definitely one of the top sunrise spots on the coast.

Early morning is one of the best times to climb Mt Coolum, before the heat of the day. To catch the sunrise from the summit, you’ll want to start early and take a torch. It’s a 800m climb from the car park to the summit and takes an average of about 1.5 hours return. It’s not too difficult a hike but moderate fitness is required, as is the expectation that you’ll be climbing a lot of stairs. Be warned, a lot of fitness groups like to use the mountain as their training ground. In particular, some of the sets of stairs going up the mountain can get pretty busy, with fitness groups racing past you one moment, only to return in the other direction a few minutes later.

If you’re after a similar experience to Mt Coolum but without the crowds, head a few minutes drive inland to Mt Ninderry, which is the wave-shaped mountain located in between Coolum and Yandina. It’s a slightly easier walk than Mt Coolum, with the added bonus of being about to see the sunrise over Mt Coolum itself. Read our article ‘Everything you need to know about hiking Mt Ninderry‘ for all the details about this hike. 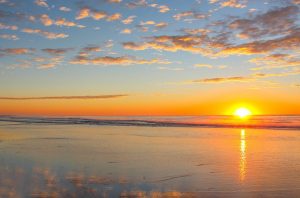 PICK A BEACH, ANY BEACH

Any of the Sunshine Coast’s beaches should serve up a beautiful sunrise, with the added bonus of being able to take a relaxing stroll along the beach. We love the peace and quiet you can get at many of the lesser known, more ‘sleepy’ spots like Castaways, Peregian or Buddina Beaches.

Noosa National Park is beautiful any time of day, but at dawn you’re likely to have the place to yourself (or only a handful of others on their morning walk) as you watch the sunrise. One of the best spots to hike to is Hell’s Gate. You can get there either along the Coastal Track from the Noosa entrance or follow the trail from the top of the paved walkway at the end of Sunshine Beach. Hell’s Gate is a rocky high bluff that juts out into the Pacific Ocean in dramatic fashion, as is a truly magical place to watch the sunrise. Make sure to also watch out for any passing whales, dolphins and turtles. 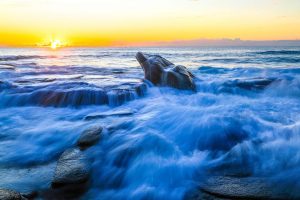 Sunrise over the famous ‘dolphin rock’ at Point Cartwright.

Point Cartwright is an ideal spot to watch the sunrise, as the headland offers some of the most stunning views you’ll find on the Sunshine Coast. Looking in a north-west direction, you’ll catch sight of Mooloolaba, Mount Coolum, Alexandra Headland, Maroochydore Beach and the beginnings of Cotton Tree. Walk to the other side of the headland and you get a straight shot right down the coastline all the way to Caloundra. 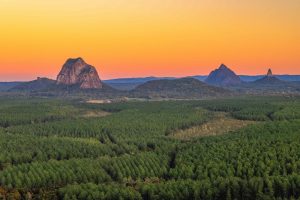 Sunrise over the Glass House Mountains as seen from Wild Horse Mountain.

Wild Horse Mountain is the mountain with the hut on top that you pass on the Bruce Highway as you drive between Brisbane and the Sunshine Coast. It’s often overlooked, but the short walk delivers breathtaking 360 degree panoramic views across Pumicestone Passage and Bribie and Moreton Islands on one side, with vast stretches of pine forest  leading to the Glass House Mountains in the other. On a clear day, you can also get lucky enough to see Brisbane. The top of the mountain is 123 metres above sea level, so be prepared for a steep 700 metre walk uphill on a paved pathway from the carpark. 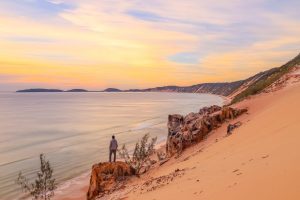 If you’re in the Rainbow Beach area, make a beeline for Carlow Sand Blow. Located at the end of a short bushwalk from the carpark off Cooloola Drive, this spectacular natural attraction is a sight to behold. The sand mass covers over 15 hectares and overlooks the towering coloured sand of coastline from Rainbow Beach to Double Island Point. It’s a magical place to watch the sunrise, but make sure to also return later in the day once the dew has dried, as it’s also a fun spot for sandboarding (make sure to take a body board!)

Want more inspiration for exploring?! Why not read…

• BEST LOOKOUTS ON THE SUNSHINE COAST

• THE BEST WATERFALLS ON THE SUNSHINE COAST

• DOG-FRIENDLY BEACHES ON THE SUNSHINE COAST 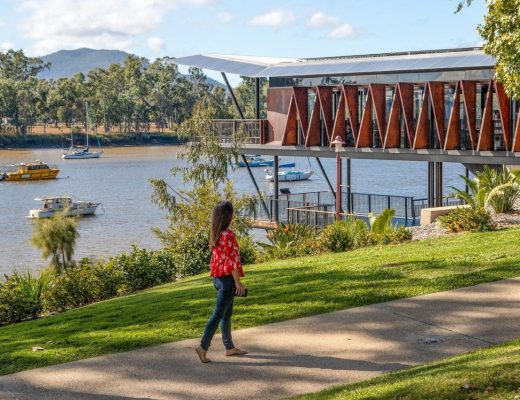 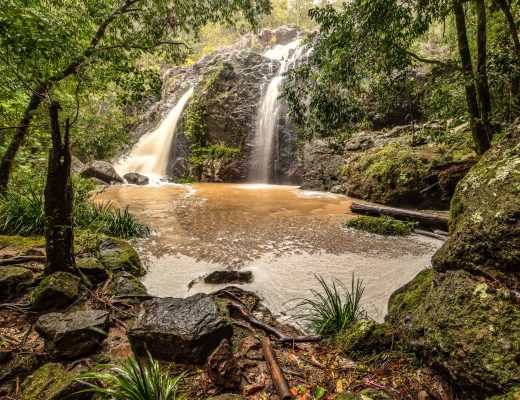